Speech on “Integrity – The Foundation of a Strong Financial Sector, By Hon. Dr. Kwabena Duffuor, Minister for Finance and Economic Planning 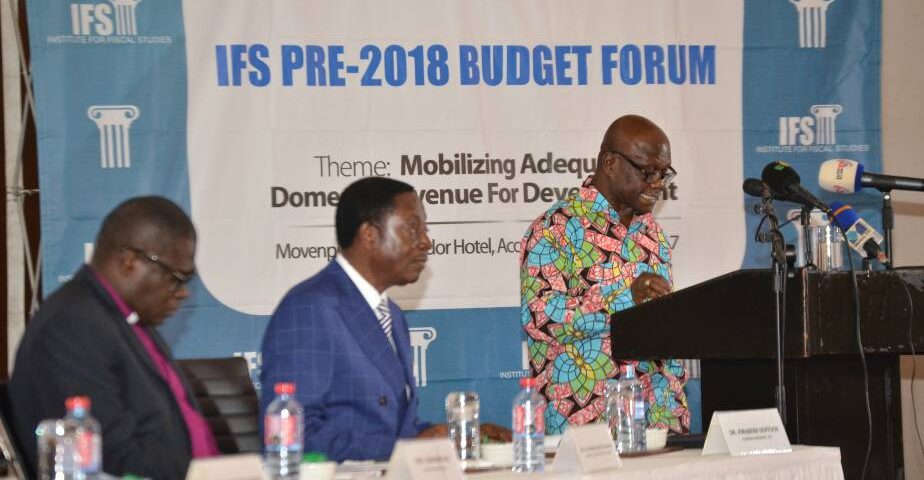 The Institute for Fiscal Studies (IFS) has called on the government to mobilize more domestic revenue to support the country’s economic growth and stability.

Prof. Newman Kusi, Executive Director of IFS, during his delivery of the key address at pre-2018 budget forum held at the Mövenpick Ambassador Hotel in Accra remarked that domestic revenue has always fallen short of the budget targets in the last couple of years, with the revenue gap increasing significantly since 2011.

“Ghana’s domestic revenue/GDP ratio has also remained far below the levels of its regional competitors. The country’s domestic revenue/GDP ratio averaged 20.4 percent between 2012 and 2015, compared to the sub-Saharan African countries’ average of 27.1 percent of GDP for the same period. This gives a revenue performance gap of 6.7 percentage points of GDP. Over the same period, government expenditure averaged 27.6 percent of GDP, compared to the average of 32.3 percent for its African peers..

Dr. Kwakye also delivered a presentation on the state of the Ghanaian economy.

Clik here to view a transcript of Prof. Kusi’s Speech.